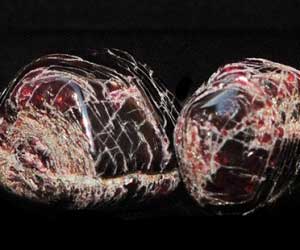 There are many reasons to choose garnet stones to wear or collect. January’s Natal Stone is garnet. It is a popular gift for January birthdays, as well as several wedding anniversaries. Garnet is the stone of loyalty, eternal friendship, and trust, which are three great reasons to choose garnet. In the past, garnets were exchanged between parting friends to ensure that they would meet again. Garnet is also known as the”stone of health”, extracting negative energy from the chakras. It is an excellent stone to hold or wear while meditating to give you a positive outlook on life.  By some, it is considered a holy stone, enlightened the soul and giving wisdom. Garnet is believed to be extremely beneficial in business, particularly when dealing with people. It aids in letting go of old ideas and promotes self-confidence. Perhaps it would be good to keep in your office!

Another good reason to choose garnets are for their beautiful colors. The name “Garnet” is derived from the Latin word “Granatum” meaning pomegranate since the crystals resembles the seeds and the fruit’s red color.  The gem comes in many shades of red, along with orange, pinkish orange, black, and green. Garnets can be found in streams as small pebbles in Asia, Australia, North and South America, and Spain.

Choose garnets for their durability. They are very hard stones, dating back to over 3,000 BC. Garnets were very popular stones in the Victorian age due to their strength (6.5 to 7.5 ) and affordability. Choose bright, clear stones for ornamental uses. Garnets are also used commercially for grinding.

Care of Garnets
Garnets should be placed under running warm water monthly to cleanse and then recharged in the sun.

The Garnet is attuned to the Archangels Haniel, Gabriel, and Raphael, bringing harmony creativity and self- confident to the wearer.
Happy Birthday to all of my January Babies: Michael, Melinda, Mabelle, Marilyn, Brae, Rachael,  EJ and Muzzy.

Legends of Amethyst
Scroll to top