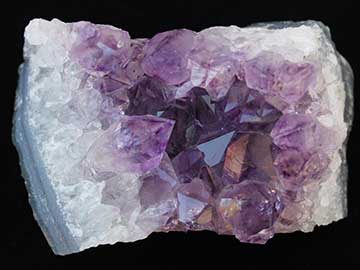 We know that February has long been celebrated as a month of romance. Here are some legends that may tell us why. The association between Amethyst and Valentine’s Day is an interesting story. The legends of Amethyst and the story of St. Valentine are shrouded in mystery. St. Valentine was a Roman priest who encouraged marriage within the church during troubled times. He was known to wear an Amethyst engraved with the figure of Cupid. After his death and since the Middle Ages, St. Valentine has been associated with love. He is commemorated on February 14.  Valentine’s Day is a day we remember those we love. It is still observed each February 14th.

Are these legends the reason it is February’s Natal Stone?

The Amethyst has been associated with many legends and myths for centuries. The word comes from the Greek word “Amethystos” which means “ not drunk”. The Greeks wore the gems to protect them from drunkenness. The Ancient God Bacchus, known for Wine and Partying, has also been connected with the gem. Legend has it that Cleopatra wore a signet ring of Amethyst engraved with the figure of Mithras, which symbolized the divine idea, source of life and light. Catherine the Great of Russia was also fond of the the purple stone. She wore many rings and necklaces with the gem. In India, the Buddhist Monks meditated with the stone. It was believed to help accelerate the development of psychic abilities. It may clear ones aura and balance any dysfunctional energy in the body. Remember to leave a Amethyst in your bathroom or living room if you have any addiction issues.

Amethyst is a variety of quartz, which produced a various shades of purple stones due to certain impurities. The deep purple stone has adorned many crowns and royal jewels to signifying Royalty. The stonet was once considered as rare as the diamond, but today it is one of the affordable gemstones.

This beautiful and unique stone should be cleansed once a month under running warm water and left over night to dry. DO Not EXPOSE to SUNLIGHT as it will fade the stone.

Amethyst is attuned to Archangel Michael bringing Peace, Balance, Inner Strength and Contentment to the wearer. Happy Birthday to all of my February Babies: Su, Bill, Joe, Martin, Anna, Bartola and Melissa.

Earth and Water
Scroll to top