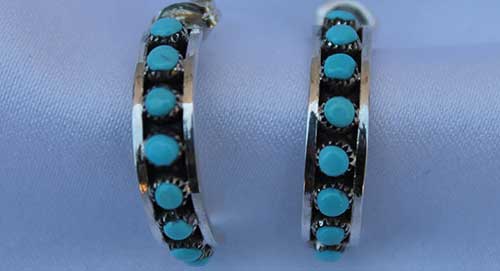 Did you know that December has three birthstones that are all unique shades of blue? TheDecember birthstones are the Blue Zircon, Tanzanite, and Turquoise.

The Blue Zircon is the “Stone of Virtue”

The Zircon is the oldest mineral on earth. It’s mined in Australia , Cambodia   Canada, Sri Lanka, Tanzania, Thailand. and the United States. The blue zircon is the first of the December birthstones. During the Middle Ages was thought to promote Honor, Prosperity, Spiritual Growth, Wisdom, and protect the wearer when traveling. The gemstone brings confidence, compassion and guidance to achieve your goals.  The blue zircon stone will scratch easily so be sure to handle your zircon with care.

Tanzanite is the “Stone of Magic” and one of the unique December birthstones.

In 1967 near the foothills of majestic Mount Kilimanjaro the zoisite was discovered. This velvety blue colored stone, makes it a very rare and expensive gem. ” Tiffany & Company recognized the blue gem’s potential and agreed to be the main distributor with a promotional campaign in 1968 renaming the stone “Tanzanite” after Tanzania. Tanzanite is better for earrings and pendants than it is for rings due to it’s ability to scratch easily. It is the second of the December birthstones.

Turquoise is the “Master Healer”

Turquoise is mined in Armenia, Brazil, China, Egypt, Iran, Mexico, Southwest America, and Tibet.
The oldest turquoise mines are located in Sinai Peninsula of Egypt. The Egyptians called  turquoise Mefkat which meant “Joy and Delight”.  King Tut’s burial mask and tomb was adorned with Turquoise.
It’s Iran that has the best turquoise, which is their National Gem. They named turquoise Pirouzeh, which meant ” Victory”. The Persians said the reflection of the New Moon on a turquoise brought good luck and guarded against evil. It was considered a Love Charm by some.
For the last several thousand years the American  Southwest Turquoise has a excellent history with the Native American Indians.  The Hopi, Navajo, Pueblo, and Zuni Indians made amazing earrings, necklaces , rings and ceremonial pieces. They called Turquoise ” Chal- cui- hui – tai” meaning the highest and most valued thing in the world”.  The United States is now the world’s largest supplier of turquoise. It is worn by many people born in December. It is one of the the most popular of the December birthstones. If you are shopping for a special turquoise piece, be sure to check out our Three Strand Turquoise Necklace or our small hoop turquoise earrings, featured here.
This blue gemstone is sensitive to Makeup, Perfumes, Natural Oils, and direct Sunlight.
Happy Birthday to all of My December Babies: Bene, Katherine , Lynda, Janine, Maryann. Jayne, Alison, Lana, Michael, Theria, Lorie, Laura, Hollie, Sam, Charles, Jake, and Kaylee.

Amethyst is a Cardinal Stone
Scroll to top