The Ruby is called the “The Stone of Nobility “.  It is July’s Natal Stone.

The Ancient Eastern legend about the Ruby is that it is ” A deep drop of the hearts’ blood of Mother Earth”.  It’s often worn on the brow in Eastern countries to alleviate temper build up.

The Ruby is believed to bring light to the darkness of one’s life.  It teaches one to see the truth in all things.  The gem will protect and shield on all levels.

It is attuned to Archangels Michael and Jophiel,  bringing Courage, Love, Passion, Prosperity and protecting against Evil.

Care of your Ruby stone: To discharge and recharge your Ruby run it through water and then put in the sunlight for a least 2 hours. You  should do this twice a month. 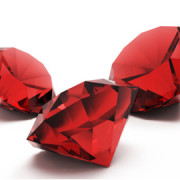