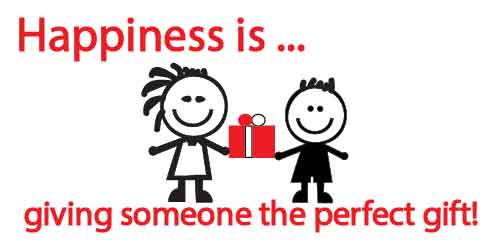 The act of gift giving may be as old as humans themselves. Gift giving dates back thousands of years. As human beings, we are social creatures who enjoy expressing our feelings through the giving of gifts.

It is believed that even primitive cavemen gave gifts to show love and affection towards one another. The bestowing of gifts was also inferred as a status symbol when leaders of tribes would show appreciation for the contributions of important achievements.

As tools developed, gifts become more elaborate. Holes were drilled into animal teeth and stones so they could be displayed on necklaces.

Egyptians gifts were often given to the pharaohs who built pyramids to store their wealth for the afterlife. Roman people presented each other with good luck charms, used as presents to carry favors and show allegiance.

By the 1500’s, gifts were often used to secure the favor of the head of a country or show allegiance in times of war. Personal gifts were given as wedding dowries, which ranged from precious stones, metals, and herds of animals.

Today gift giving is still part of our everyday culture and defines who we are and the message we want to send. By giving a gift, you not only express your feelings, but also build a stronger connection to the recipient. This greater social connection means an improvement in overall happiness due to the release of endorphins, which not only benefits the giver, but is also felt by those who receive and see the act of giving.

Now gifts are given for all occasions and celebrations. They may be wrapped in paper, cloth, boxes, or baskets and topped with ribbons or string. Whether it is an expression of love, appreciation or just to show our gratitude for  a friend, the giving of gifts is engrained in our DNA. Finding the perfect gift is knowing what they love and putting it together is a beautiful presentation to bring them happiness.

Healer of the Spirit
Scroll to top