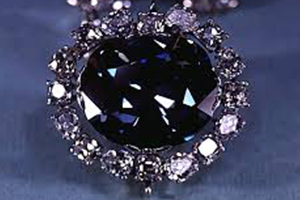 Diamond is known as the “King of Crystals”.

April’s natal stone is the diamond, sometimes called the “King of Crystals”. This crystal is the hardest mineral on earth.  Carbon crystals form the diamond and symbolize clarity, enlightenment, purity, and wisdom.

In India, this invincible stone was the stone of justice and virtue. It is said that justice was administered by the ruler while holding a diamond. The brilliant cut diamond was first executed in 1456 by Louis Van Berquen.  The brilliant cut is the most expensive of all gemstones and the greatest in demand from  “king of crystals”. The round brilliant cut consisting of 58 facets that divide the stone into a top and bottom half.  The most famous diamond is the Blue Hope Diamond. It is a example of the rare rainbow hues found in the stone. These crystals ranges from colorless, to blue, black, brown, orange, pink, and yellow. The cut of the Blue Hope Diamond (pictured here) is described as a “cushion antique brilliant” with extra facets. Today the Hope Diamond is on display in the Smithsonian.

Why is the “king of crystals” used for engagement rings?

The presentation of an engagement ring upon acceptance of a marriage proposal is believed to have originated from a Roman custom. However, in 1477, Archduke Maximillian of Austria commissioned the very first diamond engagement ring  for his betrothed, Mary of Burgundy. This sparked a trend for diamond rings among European aristocracy. The Victorians popularized ornate engagement rings mixing diamonds with other gemstones. The diamond is still considered the most popular stone for a engagement ring.

The diamond is attuned to Archangel Raziel, bringing the wearer love, peace, protect from negative energy, prosperity, and spirituality.
Happy Birthday to all of my April Babies: Joseph, Emily, Marissa, Jennie, Joey, George, and Samantha Starr.

Story of the Green Gem
Scroll to top